Nietzsche and Thus Spoke Zarathustra: The Last Man and The Superman

In Thus Spoke Zarathustra, the main character leaves his home at the age of 30 and retreats into the mountains hoping to find enlightenment. There, “6000 feet beyond man and time”, Zarathustra remains for 10 years, and in his solitude his spirit grows and he pierces into the enigma of man and existence. One morning, tired of his solitude and overflowing with wisdom, he rises at dawn and speaks to the sun:

“Great star! What would your happiness be, if you had not those for whom you shine!

You have come up here to my cave for ten years: you would have grown weary of your light and of this journey, without me, my eagle and my serpent…

Behold! I am weary of my wisdom, like a bee that has gathered too much honey; I need hands outstretched to take it.” (Nietzsche, Thus Spoke Zarathustra)

Zarathustra decides that it is time to detach himself from his heightened consciousness, and like the setting sun, descend from his mountain to empty his wisdom into the world of ordinary men.

“I must descend into the depths: as you do at evening, when you go behind the sea and bring light to the underworld too, superabundant star!

During Zarathustra’ descent he encounters a solitary old man who asks Zarathustra what business he has with mankind. Zarathustra replies that he loves mankind and is bringing them the gift of his overflowing wisdom. The old man warns Zarathustra that mankind will not take kindly to his offering, but will respond with ridicule and hatred. But Zarathustra brushes aside the old man’s warning, and continues on his mission.

He soon comes upon a town where a crowd is gathered, awaiting the performance of a tight-rope walker. Seizing upon the opportunity to spread his wisdom, he begins by teaching the crowd his cosmic principle of creative evolution.

“I teach you the Superman. Man is something that should be overcome. What have you done to overcome him? All creatures hitherto have created something beyond themselves: and do you want to be the ebb of this great tide, and return to the animals rather than overcome man?” (Nietzsche, Thus Spoke Zarathustra)

Zarathustra’s cosmic principle of creative evolution, in contrast to Darwinian evolution, proposes that evolution is not guided by accidental mutations and adaptations, but by a teleological force which regulates the development of life from a lower spiritual state to a higher. This force is directly felt by human beings as aspiration, and by embracing this aspiration, according to Zarathustra, the individual can overcome himself and evolve.

The teachings of the Christian church repressed this aspiration by spreading the idea that to seek autonomy and act in the service of one’s self-interest is a sin, while to sacrifice oneself and admit dependence upon God the highest good. As such, animalistic impulses such as sexual lust, pride, and the desire for power, were branded as evil elements to be tamed and eradicated. The individual was taught by the Christian church not to overcome himself, but to deny himself, and to weaken his body for the sake of his soul.

“The church fights passion with excision in every sense: its practice, its “cure,” is castratism. It never asks: “How can one spiritualize, beautify, deify a craving?” It has at all times laid the stress of discipline on extirpation (of sensuality, of pride, of the lust to rule, of avarice, of vengefulness). But an attack on the roots of passion means an attack on the roots of life: the practice of the church is hostile to life.” (Nietzsche, Twilight of the Idols)

Zarathustra urges the crowd to discard with the teachings of the church and instead to create a new meaning of the earth; one that embrace’s the individual’s desire to actualize and assert himself, and promotes the development of a strong body in which the natural natural instincts are seen as sources of energy to be channeled and sublimated for the sake of self-overcoming. This new meaning, Zarathustra announces to be the Superman.

“Once you said ‘God’ when you gazed upon distant seas; but now I have taught you to say ‘Superman’” (Nietzsche, Thus Spoke Zarathustra)

“Man is a rope,” Zarathustra cries out to the crowd, “fastened between animal and Superman – a rope over an abyss.” (Nietzsche, Thus Spoke Zarathustra)

The tight-rope walker’s performance is dangerous as he must traverse a rope suspended over a deep chasm. So too, in bringing about the Superman, man must live dangerously. He must assume great risks and never remain stagnant, but despite the dangers always live for the sake of self-transformation. As Zarathustra explains, those who live in this manner are the individuals destined to be the harbingers of the Superman.

“I love all those who are like heavy drops falling singly from the dark cloud that hangs over mankind: they prophesy the coming of the lightning and as prophets they perish.

Behold, I am a prophet of the lightning and a heavy drop from the cloud: but this lightning is called Superman.” (Nietzsche, Thus Spoke Zarathustra)

When Zarathustra finishes his speech, the crowd erupts in laughter once more. Believing the fault to lie in his approach, he tries a different tactic; he appeals to the pride of the crowd by warning them that Western culture is in decline, crippled by a disability of values. He informs them that this decline is breeding “the most contemptible man”, The Last Man, the counter ideal of the Superman.

His soil is still rich enough for it. But this soil will one day be poor and weak; no longer will a high tree be able to grow from it…

“Alas! The time is coming when man will give birth to no more stars….

Behold! I shall show you the Last Man…” (Nietzsche, Thus Spoke Zarathustra)

The Last Man is the individual who specializes not in creation, but in consumption. In the midst of satiating base pleasures, he claims to have “discovered happiness” by virtue of the fact that he lives in the most technologically advanced and materially luxurious era in human history.

But this self-infatuation of the Last Man conceals an underlying resentment, and desire for revenge. On some level, the Last Man knows that despite his pleasures and comforts, he is empty and miserable. With no aspiration and no meaningful goals to pursue, he has nothing he can use to justify the pain and struggle needed to overcome himself and transform himself into something better. He is stagnant in his nest of comfort, and miserable because of it. This misery does not render him inactive, but on the contrary, it compels him to seek victims in the world. He cannot bear to see those who are flourishing and embodying higher values, and so he innocuously supports the complete de-individualization of every person in the name of equality. The Last Man’s utopia is one in which total equality is maintained not from without, by an oppressive ruling class, but from within, through the “evil-eye” of envy and ridicule.

“No herdsman and one herd. Everyone wants the same thing, everyone is the same: whoever thinks otherwise goes voluntarily into the madhouse.” (Nietzsche, Thus Spoke Zarathustra)

Upon finishing his speech on the Last Man, the crowd cries out: “Make us into this Last Man! You can have the Superman!” (Nietzsche, Thus Spoke Zarathustra) Hearing their ridicule, the warning of the old man in the forest rings through Zarathustra’s head. He had come to mankind out of love and with a gift, but they responded to him with ridicule and contempt, just as the old man had predicted:

“And now they look at me and laugh: and laughing, they still hate me. There is ice in their laughter.” (Nietzsche, Thus Spoke Zarathustra)

The realization dawns on Zarathustra that the mass of men are incapable of understanding the significance of his words. And so he formulates a new mission. He is not going to bring his gift and love to mankind, but to a select few individuals with the potential to rise above the herd, and who, in the words of Zarathustra, “follow me because they want to follow themselves – and who want to go where I want to go.” (Nietzsche, Thus Spoke Zarathustra) With a newfound optimism and hope, Zarathustra leaves the town in search of new companions on whom he can bestow his wisdom.

As he departs on his journey, Zarathustra witnesses an omen in the sky. With the sun at its midday peak, he sees an eagle soaring through the air with a snake coiled around its neck, not as its prey, but as its friend. This is a strange sight, as historically the eagle,  a symbol for the highest aspirations of the spirit, has been portrayed as the enemy of the snake, a symbol for animalistic desire and evil. The union of the eagle and snake thus represents for Zarathustra the following injunction: for the full development of the self we must not only embrace our greatest possibilities, but also lift our shadow out of its psychological depths, and acknowledge our capacity for evil. As Zarathustra elaborates in one of his later speeches to his companions:

“It is the same with the human being as with the tree. The higher they climb into the height and light, the more strongly their roots strive earthward, downward, into the dark, the depths – into evil.” (Nietzsche, Thus Spoke Zarathustra) 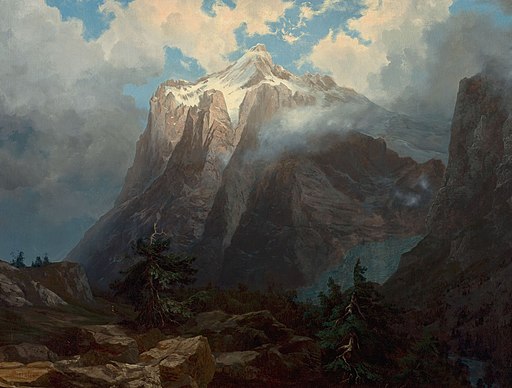 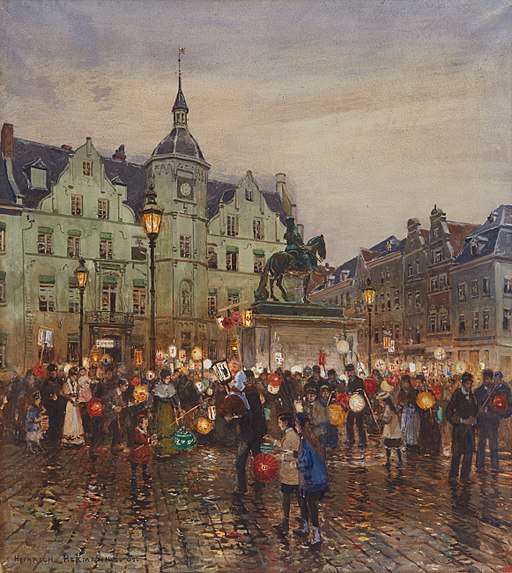 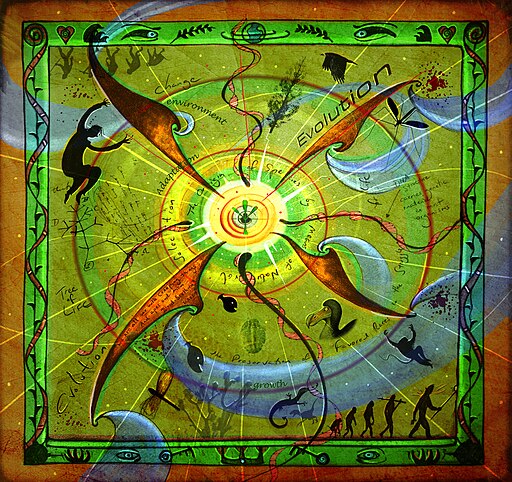 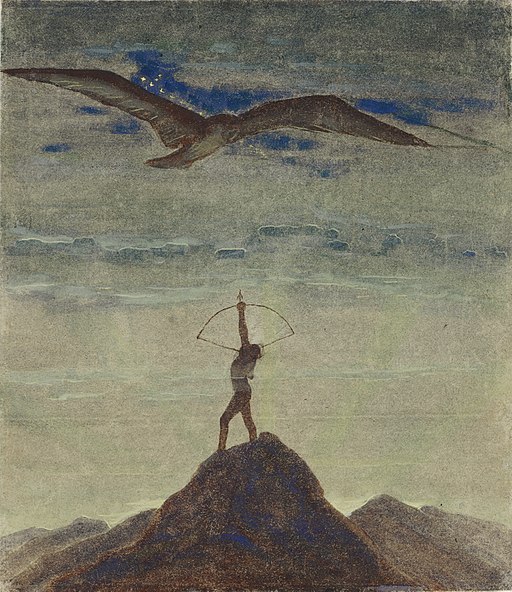 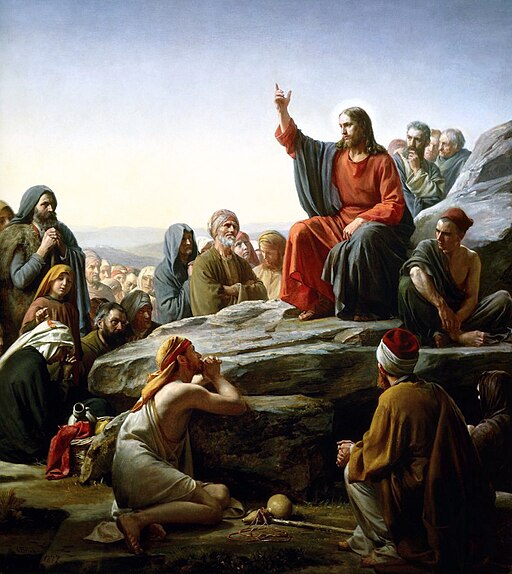 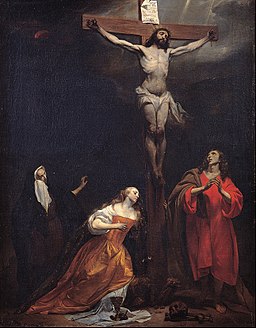 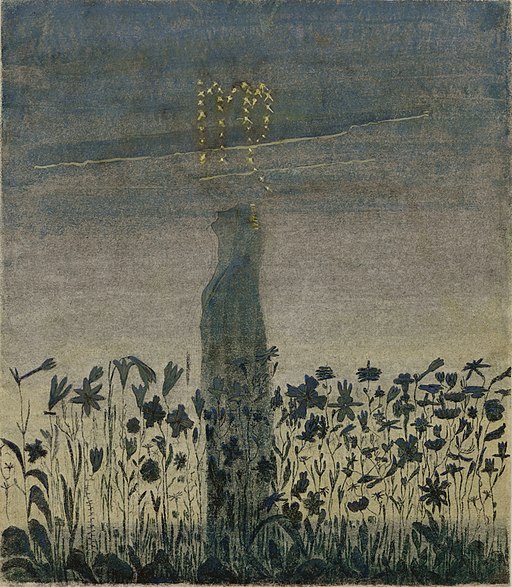 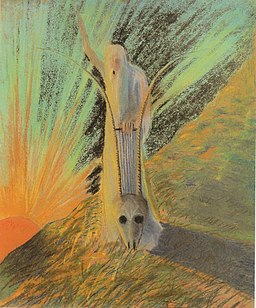 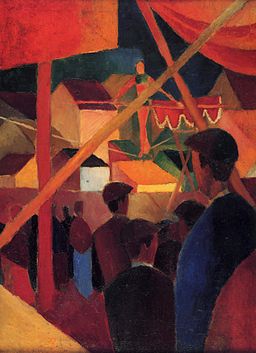 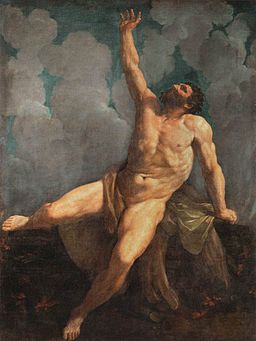 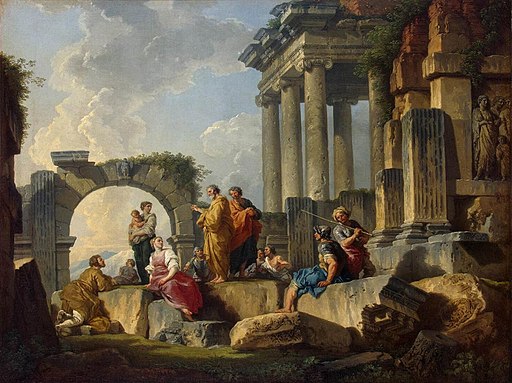 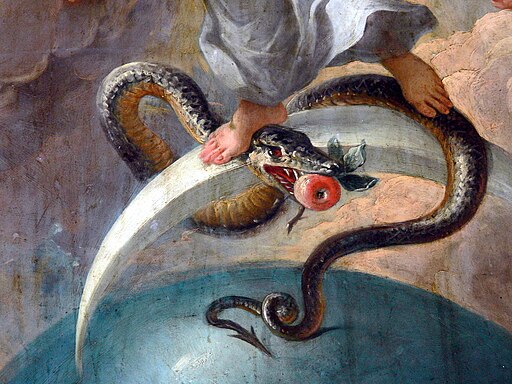 Nietzsche and Thus Spoke Zarathustra: The Last Man and The Superman